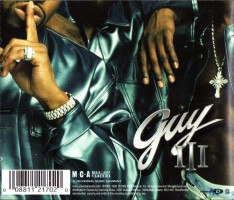 Guy III is the third and most recent studio album from American R&B group Guy, released January 25, 2000 on MCA Records. The album peaked at number thirteen on the Billboard 200 chart. At the time of its release, not all of the members were on the same page for the release of Guy III. Founding member Teddy Riley remained hopeful that his group Blackstreet would record another album despite the friction between him and group member Chauncey Hannibal. Aaron Hall insisted on recording another solo album, while his brother Damion Hall was interested in an acting career.

However, in a 2012 interview with Vibe Magazine, Riley blamed the failure of the album on the label. In the interview, he said:

"We tried to do a Guy reunion album. But I don’t think the record company did the third album any justice. MCA didn’t really get us at that point. And they were promoting us like we were jazz artists. They took us everywhere else, but to our audience. You have to know your demographics for that group. They didn’t get us on BET like they were supposed to. They were trying to get us on VH-1, but they weren’t checking for us. We had our radio record, ‘Dancin’’, that couldn’t get on BET. It was just a failure."

Their reunion turned out to be short-lived. By the time they released the second single "Why You Wanna Keep Me From My Baby", Riley left the group again. Only Aaron and Damion appeared in the video for the song. In an ironic twist on the album, a few of the songs were co-produced by Walter "Mucho" Scott and Daryl "Dezo" Adams. The two men were former members of Basic Black, a group discovered by Riley's former mentor/manager Gene Griffin a decade earlier. Guy initially derided the group as being copycats on the song "Gotta Be A Leader"- a song from Guy's second album The Future.