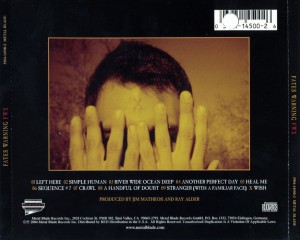 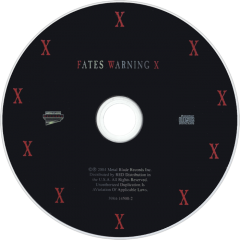 FWX is the tenth studio album by progressive metal band Fates Warning, released on October 5, 2004 through Metal Blade Records; their last album on the label until re-signing in 2019. It is also the band's last studio album to feature drummer Mark Zonder.

Album Review
There may be four years separating FWX from the last Fates Warning album, Disconnected, but the progression between the two releases is as fluid as the gap between the their 1988 metallic peak No Exit and 1997 progressive extreme Pleasant Shade of Gray is wide. Both of those career highs come to mind when listening to FWX, "Stranger (With a Familiar Face" and "Simple Human" in particular are distilled from a blend of No Exit's heaviness and Pleasant Shade of Gray's expansiveness. The ten-minute progressive excursions of Disconnected have been reigned in, but make no mistake, this is still a progressive affair, especially on the equally lush and pummeling "River Wide Ocean Deep" and "Heal Me," which make up for their less-than-progressive running times with aggressive riffs that make a welcome return to Fates Warning. Give Jim Matheos, Ray Alder and crew credit: there are few bands that have been around as long (twenty years for founding member Matheos and sixteen for vocalist Alder) that produce albums as consistent or inventive as FWX.