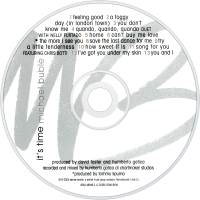 Although it took more than a year of concerts and promotional appearances, Michael Bublé's 2003 debut disc of swinging pop standards finally ascended the Billboard album chart and landed at number 47. That peak may not seem impressive at first, but in a musical world dominated by rap or the latest flavor of alternative rock, Bublé's upper chart appearance was a real accomplishment and it sparked a renewed interest in music associated with great vocalists like Frank Sinatra. With his second studio disc, It's Time, Bublé builds upon the musical foundation he laid with his debut and demonstrates that he is much more than a flavor-of-the-month celebrity. Like his debut, It's Time mines the rich history of pop music as Bublé applies his own technique to classic standards and incorporates his Rat Pack sound into modern pop songs. Other pop vocal giants have made attempts to reinterpret the pop songs of their day with appalling results (Mel Tormé's version of "Sunshine Superman" comes to mind), but Bublé has the knack for selecting the right songs that he can properly transform into edible works that avoid a cheesy aftertaste. Having a standard like "A Foggy Day (In London Town)" share space with the Beatles' "Can't Buy Me Love" may seem like a lounge lizard joke waiting to happen, but the arrangements (most courtesy of producer David Foster) and performances are seamless. Therefore, the quiet groove of "I've Got You Under My Skin" can sit comfortable next to Bublé's smoky version of Leon Russell's "Song for You," featuring Chris Botti on trumpet. Perhaps it is due to this formula working so well that Bublé has incorporated more of his unique takes on modern pop than on his debut. He even ventures into R&B territory with older hits like "Try a Little Tenderness" and "How Sweet It Is," all the while giving these songs a retro freshness that breathes new life into these gems. Pop starlet Nelly Furtado sounds lovely and elegant in the duet "Quando, Quando, Quando," while Bublé ends the disc with a beautiful reading of Stevie Wonder's "You and I." Another positive step forward is the inclusion of the lovely original tune "Home," a somewhat autobiographical "too long on the road" song co-written by Bublé. The success of this ballad provides yet another direction that he can explore and expand upon. Throughout the disc Bublé emits the feeling that he loves these songs and truly enjoys what he is doing. He sounds pure of voice and pure of heart. Those are rare commodities in the recorded world and they, along with Bublé's talent and vision, help to make It's Time a wonderful listening experience.