06) Summer Wind
07) You'll Never Find Another Love Like Mine 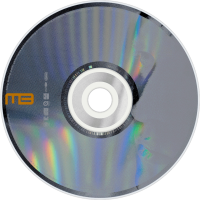 Unlike most young guys who gravitate towards the latest rock or rap trend, Michael Bublé chose to study the classic works of pop vocal masters like Ella Fitzgerald and Frank Sinatra while slowly developing his own technique and career as a vocal interpreter. Thanks to producer David Foster, the 25-year-old Bublé has graduated to the big time with a self-titled debut disc that shows off his knowledge and appreciation for a style of music that is mostly unfamiliar to his generation. Swinging his way through a set of pop standards both classic ("The Way You Look Tonight"), and more recent ("Moondance"), Bublé already possesses a quality that reaches beyond his youthfulness, with a voice that incorporates his influences into a sound that is fresh yet familiar. When he launches into a standard like "Come Fly With Me," images of Sinatra are conjured up; but as the song progresses, the listener realizes that this is not Sinatra, or Bobby Darin, or any other famous vocalist. It is someone who has learned the art of popular song and is creating his own colorful music from shades of the past. In doing so, Bublé throws a fresh coat of paint on an old standard like "Fever," and gives it a satiny sheen that the song hasn't seen in years. In addition to revitalizing the classics, he draws in a younger audience by covering more recent, rock-era songs in a swinging gloss. Songs like George Michael's "Kissing a Fool" or Queen's "Crazy Little Thing Called Love" are jazzed up even further than their retro-based originals, and flow easily alongside the standards. The only interruption comes when Barry Gibb guests on his own "How Can You Mend a Broken Heart," with a reverb-laced vibrato that simply does not fit in this musical environment. Throughout the disc it is apparent that Bublé has done his homework and aced the test, but there is always room for improvement. Sinatra haunts his vocals a bit too much on songs like "Summer Wind," and there are moments throughout the disc when he forces his technique instead of following a natural cadence, but these minor criticisms will improve with time; and nothing can really diminish the sheer pleasure and joy he expresses in each performance. He sounds absolutely thrilled to be singing these songs, and that goes a long way in making Michael Bublé an exciting debut.