The Path of Totality 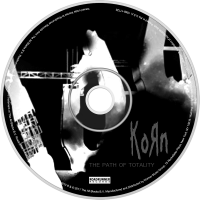 The Path of Totality is the tenth studio album by American rock band Korn, released on December 2, 2011 in Europe and December 6, 2011 in the US. The album was produced by various electronic music producers such as Skrillex, Noisia, Excision and various other independent producers. "Get Up!", is one of three tracks produced by Skrillex, and was released as a digital download on May 6, 2011. "Narcissistic Cannibal" was released as the second single on October 18, 2011.

Regarding the album, vocalist Jonathan Davis stated: "I want to trail-blaze. I want to change things. I want to do things we're not supposed to do. I want to create art that's different and not conform to what's going on. We didn't make a dubstep album. We made a Korn album." The album was made available for pre-order on Amazon and iTunes on October 21, 2011; as well as special bundle packages available on Korn.com.

Album Review
There aren’t many bands who can claim to have invented a genre. Korn did just that, though, when their 1994 self-titled debut down-tuned heavy music and wore its vulnerability like an ugly but distinctive scar as it stared into the abyss.
Nine albums and millions of record sales later, it’s unrealistic to ask that they stay the same angry young men. Still, there’s something particularly frustrating about the way they’ve settled into a well-worn groove ”“ complete with their trademark clicking basslines and stop-start riffs ”“ ever since their third album, 1998’s Follow the Leader, put a gloss on their sound and sent it supernova.
Until now, that is. Tenth studio album The Path of Totality is a bold attempt at a new direction ”“ sonically, at least. In collaboration with the vanguard of popular dubstep ”“ most notably Skrillex and Noisia ”“ they’ve taken their now immediately recognisable sound and put a dizzying spin on it.
They get full marks for effort but, unfortunately, not for the end results. It’s a credit to all parties involved that this doesn’t simply sound like a remix album, but once the novelty of the squelching, space-aged din they’ve birthed fades, what’s apparent is how little Korn have to say for themselves these days. Lead single Get Up! is an empty-headed party starter, while its follow-up, Narcissistic Cannibal, sounds jumbled, bloated and directionless. It doesn’t help that Jonathan Davis’ vocals are frequently swamped by what surrounds them, but even when he’s not clear it’s more than apparent that the fire that lit up early, nerve-twisting invectives against bullying (Clown) and homophobia (Faget) and big hits such as Freak on a Leash just isn’t burning here.
Still, there are a couple of edifying shocks the system. Burn the Obedient is a rare occasion on which they harness their new powers to sound truly intimidating, and closing track Bleeding Out’s use of piano, bagpipes and a coherent narrative makes it an ear-catching final call. Too much of the rest lacks the same impact, with the main consolation being that Korn have rediscovered their pioneering spirit.