See You on the Other Side 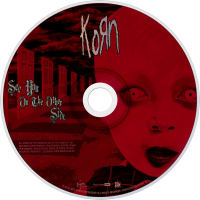 See You on the Other Side is the seventh studio album by Korn. It was released on December 6, 2005, by Virgin Records. It is their first album without long-time guitarist Brian "Head" Welch and the last album with original drummer David Silveria. The album was first certified gold in the US on January 12, 2006; a subsequent platinum record certification was awarded on March 16, 2006. The album is best known for the involvement of renowned production team 'The Matrix', best known for coproduction on works by Avril Lavigne, Britney Spears, and Shakira, who managed to give Korn's sound more mainstream acceptability.